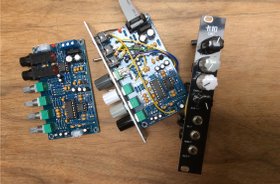 this section is currently organically growing 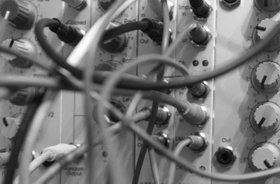 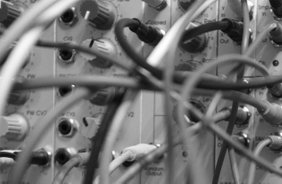 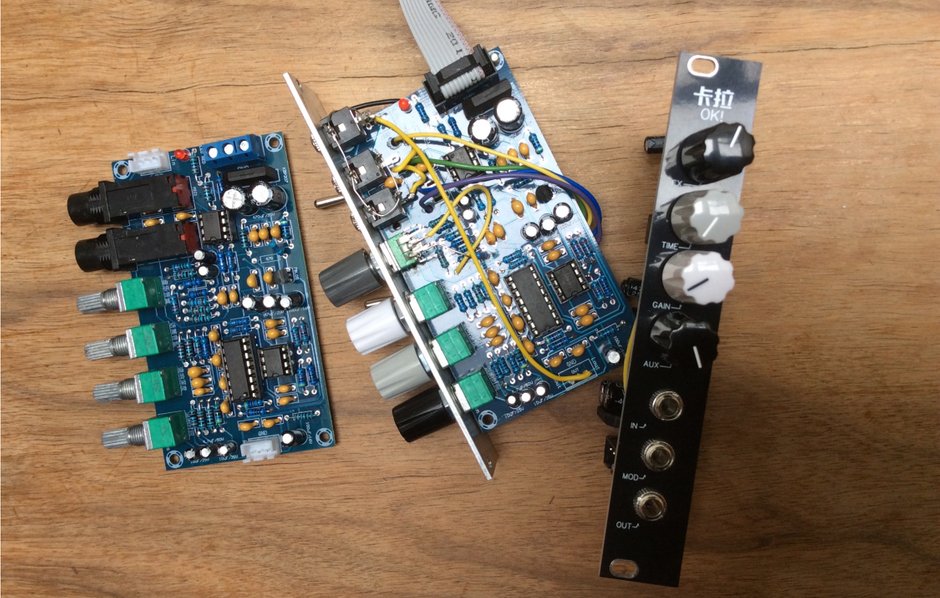 When I saw an article about transforming a cheap Karaoke board into a eurorack delay module, I was excited and ordered a few boards at once. So I started building, and yeah, it all worked: I could adjust feedback (rather a dry/wet control), delay time, input level … and from a cheap board you can not expect WOW results anyway!

So I started to use a karaoke delay module in my set-up, but soon noticed that the input level control was not useful between 1.5 and 10, due to clipping distortion and all low end disappearing. No problem, I thought, a simple voltage divider at the input will do the trick.

The next thing was the feedback control: it went from 0 to 10, but my preferred setting was definitely over 11: no way to achieve an endless delay!

So I thought: no problem, I’ll do that with a mixer module. So I connected a decaying noise source to a mixer input, and connented the mixer output to the delay module input. I also splitted the delay output and fed it back to the mixer as well, ready for heavy feedback... but no, the output and the input were in opposite phase, so the signals were just cancelling out each other. Of course this made sense: you don’t want endless feedback in a karaoke bar when a singer puts himself in front of a loudspeaker: having input and output in opposite phase is the right way to go!

For my setup, it means I had to change the phase of the delay output by sending it through an attenuverter before feeding it back to the input mixer.

And we’re not at the end yet: the delay time range was just covering the sweet range of karaoke.

As you can guess, my satisfaction level was completely in line with the low price of these karaoke boards!

The problem was: I had ordered a few boards at once! 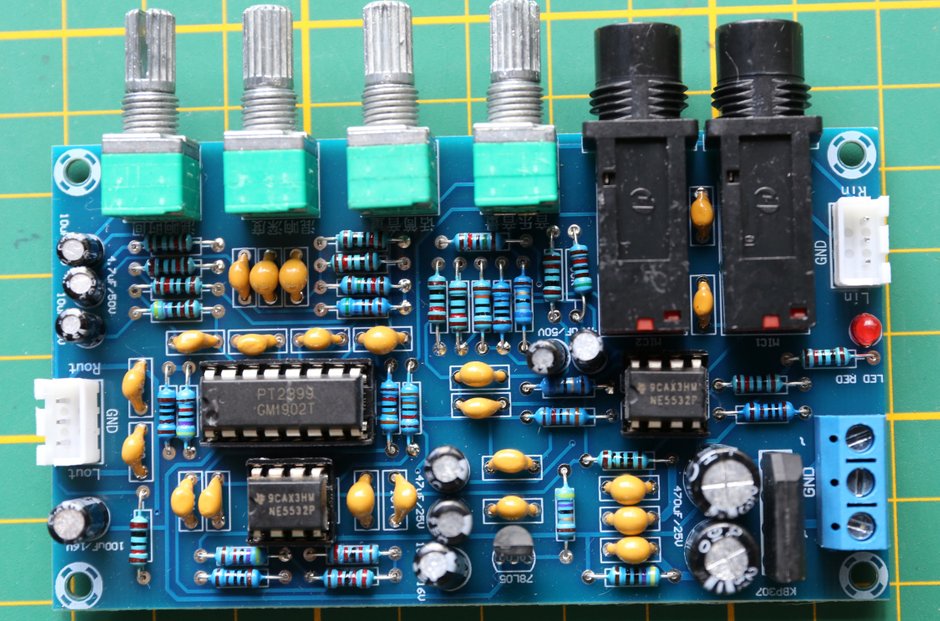 Looking at the karaoke board you can spot a PT2399 (a lovely characterful lo-fi delay chip, used in several circuits) and there are also 2 NE5532 opamps: good stuff! Because I could not find the schematics of the karaoke board, I decided to sacrifice a board for reverse engineering on a Sunday morning. In the afternoon, the sun got through the clouds, also on my drawings, so I went on with the karaoke board till the sun was down.

Here’s a short description of the board connections: there are 2 microphone inputs, a stereo input and a stereo output.

Interesting, because the PT2399 delay chip is mono! First of all, the microphone signals are connected together via a simple resistor, so it’s basically a single input. The stereo input connection is where you add the stereo karaoke music to the board: we don’t use this.

The microphone signal is amplified (1 NE5532 is taking care of that job) and input to the PT2399 delay circuit. The mono output from the delay circuit is mixed with the stereo input (which we don’t use) by the 2nd NE5532 opamp, and fed to the stereo output (in our case left and right are the same, we just use 1 output).

Time for some mods to make a great module from this board!

Before we implement the mods, we need to make the board eurorack compatible.

The first thing to fix is the input level: this board is designed to connect microphones, and by just swapping a microphone signal by a modular level signal, it’s no surprise that the input level is an issue.

So we need to make the microphone input compatible with eurorack levels. There are 2 ways to do this: adding a voltage divider at the input to lower the input level, or bypass the mic preamp circuit. Bypassing the first amplification stage (34x amplification of the low voltage mic input is the best option, also from a noise perspective.

The delay time of the PT2399 is determined by pin 6: a small resistor gives very short delay times (up to chorus effects), higher resistor values make delay times longer, way beyond the official specs!! On the board, there’s a 10k resistor + a 50k pot to adjust the delay time: from 10k to 60k. If you want to get the shortest possible delay time: simply put the pot on zero, and change the 10k resistor by a smaller value. In practice, this should not be lower than 2k2 at startup of the module because otherwise the PT2399 may latch. Once the board is on, making this resistor 0 is perfectly OK). So, to expand the delay in both directions, the 10k resistor may be changed by a 2k2 resistor (practically, it’s not needed to desolder the installer 10k resistor, just mount a 2k7 resistor in parallel!), and the potmeter may be changed by a higher value. Interestingly, the time pot (like all pots) is a stereo pot, where only 1 side is used. With a simple trick, we can keep the installed 50k pot, and change it into a 100k pot without desoldering or damaging it!) Now we have created a tamed beast till 12 o’clock, and a wild beast for the second half of the range!

Although it is possible to achieve endless feedback using an external mixer with attenuverter function (remember in and output are intentionally out of phase for karaoke use), doing this with a simple mod is so much nicer!

Making the input and output in phase is not a simple option without doing a lot of mods around the opamps, so we have to find something else. And luckily there an other solution: a 10k resistor that gives us endless feedback when we reduce it!! The board has a 10k resistor installed that is “safe”: no endless feedback. Depending on the individual PT2399 characteristics (it’s analog anyway) 10k is too safe or just on the edge of endless feedback (I have 1 board going into endless feedback with the 10k resistor, most boards don’t). The challenge is that the resistor and the PT2399 need to match, and the sweet spot is in a narrow area. Again there’s a perfect solution and easy solution: we’re going to use the 4rd pot (meant to control the stereo input which we don’t use!) and put this 50k pot in parallel with the 10k resistor. To have perfect control of the sweet spot for all PT2399 chips, we first extend the 10k feedback resistor by 1.5k: 11.5k. Now if we put a 50k pot in parallel we can still achieve 10k (50k//11.5k => 10k), and the sweet spot between 7k-10k is now spread over half the range of the pot!

Next we will add a vactrol to modulate the delay time. How to make a vactrol is out of the scope of this description. Look at the dedicated "Vactrols" section.
After installing, it's time to check out your new eurorack delay module, and let yourself carry away away away abay abay obey obey ...

I’ve experimented a lot with the PT2399, abusing connections in extreme ways, and NEVER had holy smoke. I use the word “experiment” for a reason: aside from the theory and the specs, it feels nice to play around and see what happens. There’ a way to avoid holy smoke: be aware that the PT2399 is working on +5V. Applying voltages to an IC that are outside the supply voltage is the best way to damage integrated circuits, so just don’t do that. In my experiments, I tried to short circuit any pin with any pin (except voltage supply pins), just to see what is does to the sound. Then, I used resistors, capacitors and diodes instead of short circuits, and made a list of interesting mods. To avoid problems using external control signals to this 5V operated IC, DIY vactrols are super handy: it enables you to adjust the value of a resistor in the delay circuit without any electric connection of the controlling circuit (the connection is via LED light shing on a light depending resistor!
One of the results is PSYCLICK NOISE. I decided to limit the number of mods, and kept 4 toggle switches, 8 momentary switches and 4 vactrols for the mods. Oh yes: 2 rotary switches as well, to switch between different capacitor values which affect filter settings. The filters are interesting with extended delay settings: the PT2399 is pushed out of specs (longer delay time with a fixed memory means a lower sample rate. Those who are familiar with the Nyquist theorem (sample rate should at least be double of the highest audio frequency) will immediately understand that lowering the sample rate opens the door to glitches and artifacts: very interesting, and even nicer if you have some control over the filters. 2 times 7 capacitors may seem out of proportion for lo-fi applications, but bear in mind that a rotary 10 position switch costs the same as a simple toggle switch, and with a little twist you can use it to switch between different capacitors (when used in filters: always do this in parallel with a fixed capacitor, since while switching of the rotary switch there’s no capacitor connected.

The small pcb with the 8 pushbuttons is held in place by the 4 vactrol pcb. I needed to close another 2mm of space, so I wounded a light yellow cable around the vactrol pcb for this purpose. Making a 3D puzzle of individual boards and parts looks very easy once you see the final assembly, although it happened to me a few times that I got stuck, and things just did not fit together. To avoid that, I oblige myself to draw, check and measure the last details before starting the actual job. When you stop at 95%, thinking that the last 5% will turn out by itself when you get there: that’s when things go wrong, and it may be too late to change some parts: make it again, Sam! Putting 1 hour extra in planning and preparation saves several hours in the end.

I will soon make a video about PSYCLICK NOISE, so that you can hear what it does.